Striking position overlooking the sea near Stonehaven makes this one of the most inspiring and exciting castles to visit whatever the weather or season! 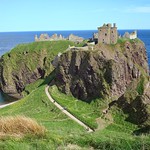 Dunnottar Castle is found just South of Stonehaven on the East coast of Scotland. One of Scotland's most spectacular castles perched above the sea on the coast near Stonehaven. A castle also redolent of Scotland's long history. Although the castle is a ruin it still gives off that air of mystery. With its cliffs as a natural defense against sea invasions. You may recognise part of it as it was used in the 1990 Mel Gibson film "Hamlet."

William Wallace, Mary Queen of Scots, the Marquis of Montrose and the future King Charles II, all have been to the Castle over the years. Most famously though, it was at Dunnottar Castle that a small garrison held out against the might of Cromwell’s army for eight months and saved the Scottish Crown Jewels, the ‘Honours of Scotland’, from being destroyed. Crown, sceptre and sword now take pride of place in Edinburgh Castle.

Dating from the 12th century, this ancient ruin was a stronghold for the Earls Marischal of Scotland. Standing 160 ft high, with the sea on three sides and a huge drop and 'curtain wall' on the fourth, it is not far short of an island. It is worth devoting considerable time to exploring one of the country's most outstanding castles, which is approached by a steep 400-yd walk from the car park. So dramatic is its setting, that it was used as the backdrop for Zeffirelli's film version of Hamlet, starring Mel Gibson. But the fortress has a dramatic and bloody history all of its own. In 1297 William Wallace (another of Mel Gibson's characters, strangely enough) burnt alive an entire English garrison here; later, in 1685, a large group of Covenanters was imprisoned, tortured and then left to rot in the castle dungeons. The castle was reduced to its present state in 1716, during reprisals for the Earl Marischal's Jacobite activities.

The castle can also be reached by a footpath from Stonehaven; contact the tourist office for the relevant leaflet. Tel. 762173.

Dunnottar Castle is located just off the main A92, Stonehaven/Montrose road, less than two miles south of Stonehaven, Aberdeenshire. To help and support our commitment to Green Tourism we would highly recommend use of public transport or a walk from the nearby town of Stonehaven. The car park at Dunnottar is small for the number of people visiting us each year so please share cars and transport wherever possible.