Ruined castle to the NOrth of Fort William, once owned by the Comyns 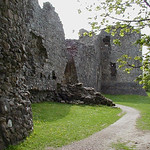 In the care of Historic Scotland and largely ruined. The courtyard castle has four corner towers of which the largest is called Comyn's Tower.

Inverlochy Castle, of c. 1270-1280 date, is a simple square courtyard contained by four high curtain walls. A massive round tower projects boldly from each corner, one, the donjon (Comyn's Tower) (D MacGibbon and T Ross 1887), being larger than the others.

The enclosure so formed has two entrances, plain pointed arch openings, without foreworks or gatehouse, through the centre of two opposite sides. The entance is but a doorway in which hung a heavy two-leaved door secured by a draw-bar and protected by a portcullis. The curtain is surrounded by a wide ditch and outer bank concentrically disposed about it. The ditch is silted but clearly definable round 3 sides. the fourth side confronting the River Lochy, was not ditched. The entrance through this side was the water-gate; before it there would no doubt be a channel from the river and a small harbour or dock. Water from the river was introduced to the ditch round the other 3 sides.

There is no proper history for this castle but tradition has it that it was built by the Comyns, Lords of Lochaber and Badenoch from about 1080 to the accession of Bruce in 1306. In 1505 its ruined site was granted to George, second Earl of Huntly on condition he built 'a towerand strength and Barmekyn' to serve as a Royalist garrison.

Open throughout the year with parking beside the site. Often unmanned and quiet site.