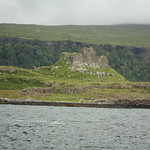 Ardtornish Castle is situated on a headland jutting into the Sound of Mull approximately 2km SE of Lochaline, Morvern.

The castle was constructed in the late 13th century and once consisted of a semi fortified two story building enclosed in a defensive curtein wall. The inner building (hall-house) was constructed of dressed basalt slabs, with a mural staircase in the east wall.

The hall house measured 17.2 by 8.8m, with a wall thickness of 2.7 metres. Renovations in the early 20th century involved facial work to the east and south walls and the addition of a segmented arched window, and a new entrance doorway.

Very little is left of the original building and the renovations, although the sill of the original slit windows survives in the seaward wall and a passage to the garderobe. The rest of the castle exists in form of foundations and scattered remnants. The castle is also believed to have contained a barn with an attached corn drying kiln and quite possibly a boat house.

The castle served as a residence and stronghold for the Lords of the Isles (chiefs of the Clan Donald) in 14th and 15th centuries. John of Islay (6th chief of Clan Donald) is reported to have died at Ardtornish Castle. The Treaty of Westminster-Ardtornish is believed to have been negotiated at the castle, offering allegiance to the King of England (Edward IV) in return for the acquisition of considerable land (north of the Forth) and money to John of Islay (4th Lord of the Isles) and his kinsmen Donald of Balloch of Dunnuyvaig and Earl of Douglas. The treaty, signed in 1462, was later to herald the downfall of John of Islay and the forfeiture of many of his titles and vast lands of Clan MacDonald, when James III (of Scotland) heard of the treachery. John retained the title of Lord of the Isles, but the title was stripped of its inheritance legacy.

These events led to John being challenged and eventually overthrown as chief by his son, Angus Óg. James IV of Scotland later stripped John of Islay of his title in 1493.

The castle was eventually acquired by Clan MacLean, only later to be abandoned in the late 1600s. The land and castle were eventually lost to the Campbells.