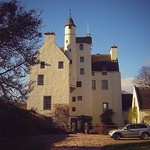 Balmanno was originally built as a L-PLan tower house in the 1580s for George Auchinleck. It was then extensively restored between 1910-20 by the noted architect Lorimer who extended the house and also furnished its interior with nods to a range of historical influences. It was sold after WW2 and remains a private house. Sadly the interior furnishings were separately auctioned off during the sale.

Possible walk up to view but the house is not open to visitors and is private family home to be aware that you may not be able to visit.