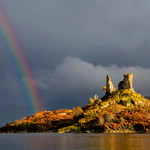 In the late 15th century Clan Mackinnon moved from their earlier base at Dun Ringill, near Elgol, to this castle at Kyleakin. At that time the castle was known as Dun Acainn. Early in the 17th century the clan moved on and the castle fell into disrepair. All that remains is this ruin, looking from some angles rather like a massive decaying tooth! Parts of the castle ruin collapsed in 1949, and there was another minor collapse in 1989. The remain ruin has been consolidated and secured for the future. In 1951 repairs on the outer face of one of the castle walls revealed a hoard of coins hidden between two stones.

You can walk around the castle from the village, but take care as you might expect!