Spectacular castle near Plockton that is being refurbished until 2013 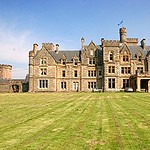 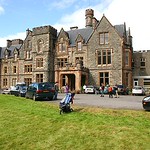 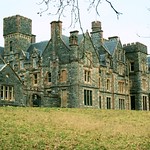 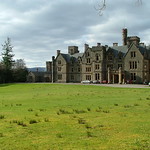 Duncraig Castle was built in the 1860's by Sir Alexander Matheson (1805 to 1886) and is a fine example of Victorian baronial architecture.

Sir Alexander was a retired business magnate (co-founder of the Jardine Matheson Group) who was also involved with the building of the West Highland Railway line and in consequence, a station was provided for him close to his new home.

After Sir Alexander's death in 1886, Duncraig Castle had a varied existence. For some years it was let for the season, to fashionable hosts for summer house parties. Then, in the 1920's, Duncraig became the home of Sir Daniel and Lady Hamilton who also owned the adjoining estate at Balmacara. Sir Daniel had spent his formative years in India and was a keen advocate of social reform. In 1938 he was approached by the Education Authority to grant the use of facilities on his estate. However with the onset of World War Two (and Sir Daniel's death at the beginning of the war) Duncraig was instead used as a Naval hospital. After the war ended (and Lady Hamilton had died) the estate was left to be administered for the good of the people of the Highlands. From 1945 until 1989 Duncraig was run as a domestic science college for girls and after its closure the castle remained empty while the debate raged about how to put it to use. From 1995 to 1997 it was the base for the BBC production of "Hamish Macbeth".

Then in 2003 the Castle was sold to the Dobson family from the Midlands - themselves the subject of a successful tv series "The Dobsons of Duncraig" - who are gradually restoring the Castle to its former glory and invite others to share the dream by opening their doors to guests either on a house-guest basis or as a setting for a romantic wedding. The castle will reopen 2013

Set in 40 acres of woodland and 2.5 km of shore line with direct private access to the beach, the view from the castle tower is breathtaking. To the north across Loch Carron are the mountains of Applecross and Torridon, to the west on the shores of the loch is the picturesque village of Plockton ("the jewel of the Highlands") and beyond, the distant peaks of the Cuillins of Skye.

Few homes in Britain can say they have their very own train station (request stops only!) especially on one of the most spectacular railways in Europe (Inverness to Kyle line). The private beach at the bottom of the garden and the private chapel within Duncraig also combine to give Duncraig its unique blend of charm and motto of "living the dream".