The castle stands on a peninsula about 50 metres above sea level overlooking the sea. It is surrounded on all sides by steep rocks and is cut off from the mainland by a natural ditch at the neck of the peninsula. It was inhabited until 1600s and is now ruined. 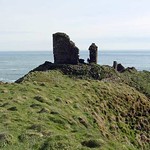 Situated on the east coast of Caithness 2 miles south of Lybster and commanding fine views of the coastline, Forse Castle is about 800 years old and sits on a high rocky peninsula. It was once cut off by a ditch and drawbridge. Believed to have been built by Sir Reginald de Cheyne, Forse was inherited by the Keiths through the marriage of one of Sir Reginald's daughters in 1350. It then passed to the Sutherlands through the marriage of a daughter to Kenneth, second son of the 5th Earl of Sutherland. From then until 1771, 17 generations of Sutherlands held it until it was abandoned.

Walk to castle from road and open all times. Be careful as the cliffs around the castle are precipitous.

Off the A99. Drive to the centre of Forse as the road turns left, park car and then follow track towards the sea - the castle is visible from the road as a tower.