Official residence of the British monarch in Scotland, Holyrood Palace stands at the bottom of the Royal Mile in Edinburgh. Holyrood Palace is the setting for state ceremonies and official entertaining. 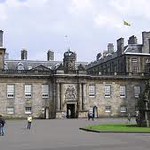 The palace began life as the abbey guest house, until James IV transformed it into a royal palace at the beginning of the 16th century. The only remaining part of the Renaissance palace is the northwest tower, built as the private apartments of his son James V. Most of the original building was damaged by fire in 1543 and further in 1650 during its occupation by Cromwell's troops, never the most considerate of guests.

The present palace largely dates from the late 17th century when the original was replaced by a larger building for the Restoration of Charles II, although the newly crowned monarch never actually set foot in the place. It was built in the style of a French chateau, around a large arcaded quadrangle and is an elegant, finely proportioned creation. Designed by William Bruce, it incorporates a castellated southwest tower that balances perfectly the northwest original. Inside, the oldest part of Holyroodhouse is open to the public and is entered through the Great Gallery, which takes up the entire first floor of the north wing. Here, during the '45 rebellion, Bonnie Prince Charlie held court, and it is still used for big ceremonial occasions. The walls are adorned with over one hundred portraits of Scottish Kings, most of them mythical, beginning with 'Fergus I, BC 330' and ending with James VI. Commissioned from the Flemish artist, Jacobus de Wet, they have been described as "paltry daubings […] painted either from the imagination, or porters hired to sit for the purpose". They certainly make for some amusing viewing.

The Royal Apartments, in the northwest tower, are mainly of note for their association with Mary, Queen of Scots and in particular for the most infamous incident in the palace's long history. It was here that the queen witnessed the brutal murder, organized by her husband, Lord Darnley, of her much-favoured Italian private secretary, David Rizzio. He was stabbed 56 times, on a spot marked by a brass plaque and, until it was removed quite recently, by a distinctly unsubtle fake bloodstain.

The later parts of the palace, known as the State Apartments, are less interesting, though decorated in Adam Style, with magnificent white stucco ceilings, particularly the Throne Room and Dining room. These are associated with later monarchs, such as George IV, who paid a visit in 1822, dressed in flesh-coloured tights and the briefest of kilts, rather appropriately perhaps, given the length of time he actually spent here. But it was Queen Victoria and Prince Albert who returned the palace to royal favour, as a stopover on their way to and from Balmoral. This custom has been maintained by her successors and the present queen still spends a short while here every year at the end of June and beginning of July.

Closed to the public during state functions and during the annual royal visit in the last two weeks of Jun and first week in Jul.

By train: Edinburgh Waverley. The Palace is a 15-minute walk from the station.

By road: There is a public car park adjacent to the Palace.