Magical hidden castle beside the chapel that is a must visit. Barely known and hidden away... open to public 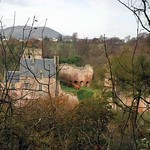 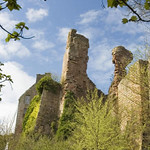 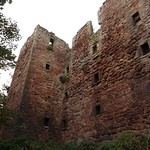 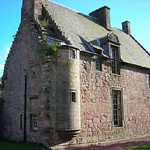 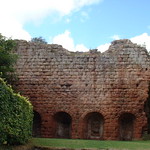 Roslin Castle (sometimes spelt as Rosslyn Castle like the chapel) is missed by most visitors to the chapel, not least because it is hard to see unless you know where to look.

It was built by the same family who were responsible for the chapel, the Earls of Caithness and was inhabited in one fashion or another since the 14th century when it was built. Its location built into the cliffs and with a single drawbridge across the gorge must have made it virtually impregnable until the advent of cannons and gunpowder reversed the equation. Certainly the Earl of Hertford and General Monck had few problems in the 16th century when they sacked the castle. There were various refurbishments of the castle at different times, the most recent by the Landmark Trust provides accommodation in the house inside the castle.

As with the chapel, there are various stories associated with the castle such as a lady who will return to reveal the secret treasures hidden in the vaults (somewhat like the da Vinci code).  Another treasure story surrounds the visit to Roslin Castle of Count Poli from Italy in 1834 who was allegedly a descendant of the last Provost of Rosslyn Chapel who had been forced to flee to Italy after the Reformation of 1560. It is alleged that after following instructions written by his ancestor, he discovered the hiding place in the castle vaults of a hoard of manuscripts and books that had been hidden during the Reformation. It is claimed that he returned with them to Italy, including a copy of a Latin history of Scotland from the beginning of the world until 1535. This is now claimed to be part of the Vatican Library.

Open to casual visitors approaching on foot from the Roslin Glen car park.

There are buses from central Edinburgh to the chapel.

There are 2 ways of getting to the castle. Either via the footpaths and track that descend from Rosslyn Chapel or from the car park in Roslin Glen. Footpaths lead you over a bridge across the River North Esk and around the west side of a steep wooded promontory. Eventually a set of steps lead you up to the approach road to the castle, close to the bridge that is its only link with the rest of the world.