The oldest continuously occupied castle in Scotland. Now occupied by the chieftain of Clan Malcolm 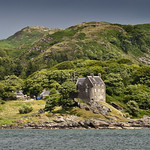 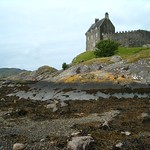 With its dramatic location overlooking the seaward end of the Crinan Canal and the Firth of Lorn, this is every bit the castle you would expect and if it seems famililar, it is because it has featured in a number of movies over time.

Originally built for the MacDougalls, it became a Campbell castle before moving ownership to the Malcolms. A number of stories are associated with the castle of which the most famous is that one the MacDonald Piper. He was part of a Macdonald group who captured the house ion thew absence of the Campbells. When the Campbells returned, they retook the house and killed all the MacDonalds except for the piper who they respected. They decided to lay a trap and got the Piper to pipe to the returning Macdonalds. However, the piper played a "Pibroch" which warned the Macdonalds of the trap. The campbells then punished the piper by cutting both his hands. he then bled out to death. Recently a grave was uncovered which housed a handless corpse, so there may some truth to the story.

Open only by appointment. However, at low tide you can walk around the front of this dramatic house.