Privately owned castle set in splendid isolation in the middle of a loch. Truly a fairytale castle. You expect a damsel in distress to appear at a window. 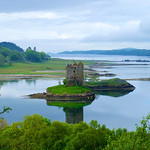 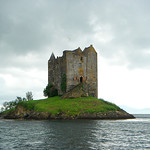 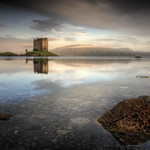 The castle was erected by the Stewarts of Appin at the behest of James V. By the early 17th century it was in Campbell ownership and in 1631 was reconstructed at the upper levels and re-roofed. In 1686 it was in Stewart hands again but was once more lost, this time in forfeiture for Jacobite allegiance. Roofless by 1840, it returned to the Stewarts in the 20th century and in 1965 a programme of restoration was started. There is an entrance at ground floor level leading to vaulted cellars but the principal approach to the tower is against the north-east wall by a powerfully sculptural forestair which was begun in the late 17th or early 18th century and was completed during repairs undertaken in 1909. This entrance leads to the lower hall. The oblong tower rises to a third floor gabled garret with parapet walks, a cone-roofed angle round and a gabled cap-house.

Best viewed on the approach to Appin on the A828 Oban-Fort William road.