Ruinous C16th castle near to Wick in Caithness. Its most striking characteristic is its position teetering on the efge of the cliff! Walk able or view from the beach. A  photographer's delight. 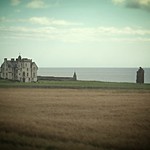 Not a great deal is known about the building of the castle although it was reputedly built on previous fortalice. It was once four storeys tall but marge parts of the structure have fallen away and it was described as ruinous as early as 1700 although some later repair was attempted (1726). It  seems an unlikely position for a fortress except that it could easily be defended as it could only be approached from the landward side, however the emergence of guns would have made that irrelevant in terms of its defensibility.

The castle seems to play no part in history and the Earl of Caithness would have had little need for it as he enjoyed the use of a number of other castles nearby.

Great care should be exercised when visiting Keiss as it is in a dangerous state, with the curtilage of the site being fenced off. There have been recent collapses in the solum and under no circumstances should the structure be entered.

Access to the castle is by an easy 3/4 mile walk from Keiss Pier/Lang Head where there is ample car parking. You will pass some ancient broch sites on your way and as you approach the edifice you will be impressed by the elegance of the structure poised as it is right on the cliff edge, almost leaning back on itself as a precaution. It seems imposing from a distance but is really quite small and intimate close up.