Tantallon Castle sits three miles east of North Berwick, off the A198. The mid-14th-century ruins perch dramatically on the edge of the cliffs, looking out to the Bass Rock. 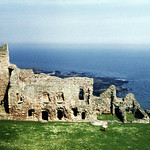 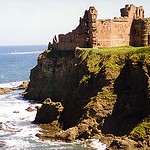 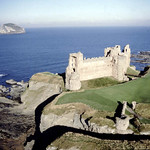 This formidable fortress was the stronghold of the 'Red Douglases', Earls of Angus, until Cromwell's attack in 1651, which left only the massive 50-ft high curtain wall intact.

Tantallon Castle was built in the 1350s by a nobleman at the height of his power. In 1354, William Douglas came into possession of all his father’s lands, as well as those of his uncle, ‘the Good Sir James of Douglas’, a close friend of King Robert Bruce. The estates included the barony of North Berwick. In 1358 William was created Earl of Douglas, by which date the builders may already have begun to build his new stronghold.

In the 1380s the dynastic house of Douglas split into two branches, known as the ‘Black’ and the ‘Red’. Tantallon passed to the junior line, the ‘Red Douglases’, Earls of Angus. For the next 300 years, the earls of Angus held sway at the castle, acting out their role as one of the most powerful baronial families in Scotland.

During that time it endured three great sieges, in 1491, 1528 and 1651. The last, by Oliver Cromwell’s army, resulted in such devastating destruction that the mighty medieval fortress was abandoned to the birds.

Tantallon was the last truly great castle built in Scotland. Its architecture harked back to the mighty stone castles of enclosure of the 13th century, such as Bothwell Castle. These were characterised by enormously thick and high stone walls enclosing large closes, or courtyards. Lofty stone towers projected from the great curtain, wherein the noble life was lived.

Tantallon’s plan differs from most great 13th-century enclosure castles only because of its situation, at the edge of a promontory. Although the curtain wall enclosed the entire site, the castle only needed formidable defences along the landward side. That great curtain wall of red sandstone still stands remarkably entire, as do the three towers in which the mighty earls of Angus and their henchmen lived their lives.

The architecture of warfare

The castle was constructed in an age before gunpowdered artillery existed. Its high, thick walls had simply to withstand assault from stone-throwing machines, battering rams and arrows. This explains the almost complete absence of openings in the curtain wall, the concentration of defence on the battlements at the wall top, and the wide, deep ditch in front.

The invention of the gun changed all that, and subsequent owners had to improve the castle’s defensive capability. They filled in the wall chambers to help withstand incoming cannon shot, inserted gunholes and built additional gun defences outside. These included a guntower beside the outer gate, and a ravelin (an earthen gun emplacement) beyond. It was all to no avail, for in 1651 Cromwell’s heavy guns, mounted on adjacent promontories, ripped the guts out of the end towers.

To get there, take the Dunbar bus from North Berwick or turn off at sign from A198