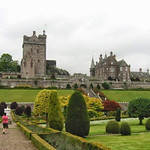 The castle was originally a C15th tower house which was then expanded in C17th before being rebuilt again in Victorian era. The gardens date from 1630s but were redesigned in C19th and then replanted in 1950s.

The castle was sacked by Crownwell in 1653. The mansion was built up from 1689 under the Drummond Family. The owners as Jacobite supporters were forfeited the castle before being rebought by the family in 1784.

The gardens are open but not the Castle.