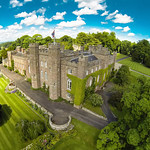 Situated a few miles outside Perth on the A93 Braemar Road, is the unmissable Scone Palace, one of the most historically important places in the country.

The home of the Earls of Mansfield, Scone has a long and fascinating history. It was the capital of the Pictish Kingdom in the sixth century and home of the Celtic church. Here, Kenneth MacAlpin united Scotland, and in 838 AD, placed the stone of Scone (or 'Stone of Destiny') on Moot Hill, opposite the palace entrance. This became the ancient crowning place of Scottish kings, including Macbeth and Robert the Bruce. The Royal City of Scone became the seat of government, and the kings of Scotland resided at the Palace of Scone before their coronations. The coronation stone was removed to Westminster by that most hated foe, Edward I, in 1296, and only recently returned to Scotland in a desperate, but failed, Conservative attempt to win back support north of the border. The famed stone currently resides in Edinburgh Castle. In 1651, the last coronation in Scotland took place when King Charles II was crowned by the Scots on the Moot Hill. The ceremony was attended by Lord Stormont, forefather of the present occupier, Lord Mansfield. Part of the church where this took place still remains. Today, Scone Palace attracts over 100,000 visitors per year.

Aside from its hugely impressive history, the palace also houses beautiful collections of porcelain, needlework, royal furniture, clocks, ivories and many other absorbing artefacts.

You could also spend a few hours walking in the magnificent 100-acre gardens, filled with bluebells, rhododendrons, roses and rare trees, with strutting peacocks and Highland cattle roaming around.