15th century stately home which is mainly closed but can be viewed by appointment. 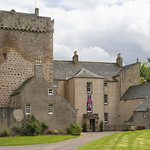 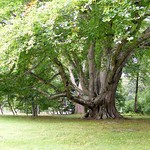 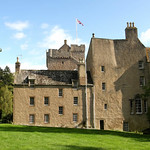 Pronounced Kilrawk, it is owned by a trust who used to run it as a "christian" guesthouse but this closed around 2012 after the death of Elizabeth Rose. There is some bunkhouse accommodation for groups.

Although the house is not open or the gardens (except for occasionally) but there is now a conference centre on site.

In the 6th century A.D., following the preaching of the missionary Columba in Inverness, the Nairn valley was evangelized and settled with several Christian churches. They were marked in place names by the prefix ‘Kil’ – the Celtic word for church. Tradition suggests that an area in the grounds of the castle, now occupied by a dovecote, was the site of an ancient church.

The first six generations of the Rose family at Kilravock lived in a house, probably part stone, part wood, situated at the top of the hill by the Cedar of Lebanon.

In the 14th century, and for more than a century after, lawlessness abounded and clans and families schemed against one another. The period of strong Scottish monarchy had gone and rival claimants to the throne appeared. The wooden houses, sufficient for times of comparative peace, now passed away and by the end of the 15th century the skyline of the Nairn valley was marked by the grim battlements of castles at Rait, Cawdor, Kilravock and Daviot.

The Building of the Castle

The Kilravock tower was built by the 7th Baron under licence granted by John, Lord of the Isles and Earl of Ross, on 18th February 1460. There is a tradition that the architect was a servant of James III called Cochran, who also designed Cawdor Castle. In any case, Cawdor was built a few years earlier, and the same mason’s marks are to be found in the doorway stonework of both castles.

The mansion house part was added in 1553 by the tenth baron, mainly to accommodate his household of seventeen female dependants – sisters and daughters.

The main staircase and corridors and the West Wing were added during the 18th century, at which time the Queen Anne window in the drawing room was put in, the drawing room ceiling heightened and the old stone walls in most rooms plastered. The powdering closets in the corners of the historic castle bedrooms were also added at this time, two being made in what had been a turret staircase.

A scullery, pantry and bathroom were built in 1926 in a style which successfully compliments the earlier building.

In May 1967 the castle opened its doors as a Christian Centre.
In 1984 the 25th Baroness, Miss Elizabeth Rose, gave the castle and its immediate environs into the ownership of the Kilravock Christian Trust.