Why are 200 stones aligned in a pattern in this field (and there were probably 600 to start with). What was there purpose? This is the most striking and most mysterious of the stone lines in Caithness. Just off A99 South of Wick and easy to visit. (signposted) 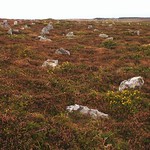 The Hill o’ Many Stanes is the largest and best preserved of several multiple rows of small stones which were erected by the inhabitants of Caithness and eastern Sutherland, around 4,000 years ago.

The 200-plus stones, none of which are more than waist height, are arranged in at least 22 rows. These rows fan out slightly as they descend the south-facing slope. In the last 100 years, 50 stones may have been lost. If the pattern was once complete there would probably have been some 600 stones covering the hillside.

Stone rows, like stone circles, may have been used for gatherings and religious ceremonies. It is also possible that they were used to follow the solar and lunar cycles. What is clear is that considerable time, effort and organisation were expended by the Neolithic farming community to create this strange arrangement.

Follow sign from A99 and drive down minor road for half a mile and the field is on the left. There is limited parking and the site is quiet.