Once substantial township entirely cleared in the Highland Clearances. Eery and tragic evidence of how this event transformed this land and landscape. 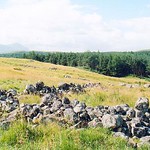 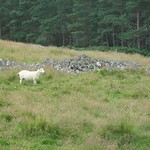 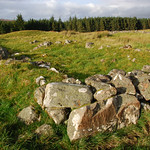 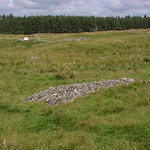 Rosal was just one of many settlements that were cleared between 1810 to 1815 by the Sutherland Estate to make way for sheep farming which required few workers.

Rosal is one of the best examples of these many settlements and has been excavated and interpreted. It is especially well worth visiting as there are signboards explaining its layout.

We have linked to a long interpretation of the site which provides much evidence on how the people lived and farmed before they were cleared.

Here is the account given by Donald MacLeod who witnessed the event first hand:

"I was an eye-witness at the scene. This calamity came on the people quite unexpectedly. Strong parties, for each district, furnished with faggots and other combustables, rushed on the dwellings of this devoted people, and immediately commenced setting fire to them, proceeding in their work with the greatest rapidity till about three hundred houses were in flames!

The consternation and confusion were extreme; little or no time was given for the removal of persons or property - the people striving to remove the sick and the helpless before the fire should reach them - next, struggling to save the most valuable of their effects. The cries of the women and children - the roaring of the affrighted cattle hunted at the same time by the yelling dogs of the shepherds amid the smoke and fire - altogether presented a scene that completely baffles description: it required to be seen to be believed.

A dense cloud of smoke enveloped the whole country by day and even extended far on the sea; at night an awfully grand and terrific scene presented itself - all the houses in an extensive district were in flames at once! I myself ascended a height about eleven o'clock in the evening, and counted two hundred and fifty blazing houses, many of the owners of which were my relations, and all of whom I personally knew; but whose present condition, whether in or out of the flames, I could not tell. The conflagration lasted six days, till the whole of the dwellings were reduced to ashes or smoking ruins."

This account was published as letters later entitled Gloomy Memories which is the most important first hand account of the Clearances. It reveals how sudden and dramatic the events were!

http://scotlandsruralpast.org.uk/index.php?option=com_content&view=article&id=125&Itemid=221 Interpretation of the site Text of Gloomy Memories